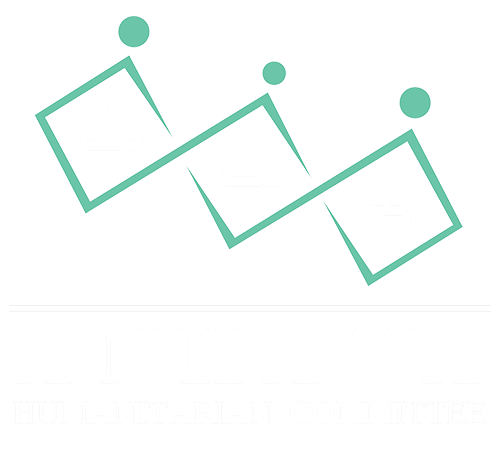 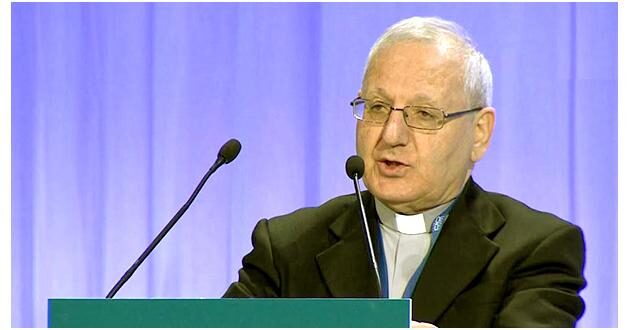 I want to share with you some of the concerns of Christians, more than half of whom emigrated, and the rest are on the (standby) list due to instabilities, the absence of equal opportunities, and justice of the law. Without considering, the Iraqi Christians are the indigenous people of the country and partners in the homeland!

Theater of The Absurd

Every once in a while, a Christian politician comes out to unbelievably declare that the Popular Mobilization Forces (Hashid) is divine! Although the Shiite authority itself did not use such a description. These politicians also use pictures of the Virgin Mary, the Lord Christ, and crosses in processions, as if we were in a crusade! Misusing religious symbols in the wrong places and times is considered a desecration!

A while ago, a Christian deputy appeared on Al-Ahed TV saying: “Sheikh Khazali applied the teachings of Christ and the morals of Christ….” With all due respect to His Eminence Sheikh Khazali, this description intersects with public morals. The honorable Sheikh is a Shiite Muslim who applies Islamic law, not Christian education. I do not understand why religions are involved and distorted in politics! These masks must be lifted!

Christians live in a state of frustration because of unfair personal status laws: the Islamization of minors and the Islamization of people forced to convert to Islam by al-Qaeda or ISIS under threat of death. I personally sought to return them to their Christian religious status in response to their request, but my requests were denied under the excuse of apostasy. This is not apostasy, but public coercion, because the choice of religious conversion is not made out of conviction and freedom but out of coercion!

There is a national law that states Christian employees (after leaving their governmental job due to retirement or emigration, or any other reason) are replaced by other Christians, but this is not being implemented due to sectarianism, bribery, and seizuring of jobs.
A couple of examples are mentioned, but the cases are not limited to only these; in one case, the minister signed an employment application for 5 Christian youths. However, the responsible manager refused to implement it and demanded a large sum (a blatant bribe)!

It was said that the Police College accepted 3,000 applications to join the police, but not a single Christian was hired among these, while I had personally submitted ten names.

Two weeks ago, a Christian who holds a Ph.D. degree and is a director in one of the ministries came to me and said, “people are fighting me and want me to give up my position so that someone else can seize it!”

An attempt was made to exclude a well-known, respected, and professional woman, who clearly had the praise of her superiors, but she remained because she defended her right vigorously.

A few days ago, the head of the Investment Commission submitted her resignation, and according to the testimony of many, she was a sincere and honest person to her job and to Iraq. After her resignation, a campaign was launched questioning her certificate’s validity and defaming her reputation.

The list is long. These immoral behaviors will remain in the memory unless they are addressed.

In the Nineveh Plains, the concerns of Christians increased so much that they began to emigrate again! I was told Christian Families from Nineveh plain leave Iraq at a rate of 20 families per month due to the chaos, fragmentation, and favoritism created by sectarian militias!

How could a Christian or Muslim who believes in God commit such transgressions?

Who will protect these peaceful Christians who are loyal to their homeland if the state does not protect them? These are painful violations, and they have repercussions on Iraq’s reputation.

With agony, I say: If you do not wish us to remain equal citizens in our country, Iraq, then be honest about it! So that we can manage ourselves before it is too late. Catholic Organizations in Iraq Meet and talk about persecuted Christians among other topics!

Catholic organizations working on service and relief projects in Iraq held a second meeting in Erbil at the invitation of the Ankawa Humanitarian Committee of the Chaldean Archdioecese of Erbil. Representatives of the participating Catholic organizations highlighted their most important challenges and achievements, including support for Christian minorities in the country.

The attendees discussed the main obstacles facing the work of Catholic organizations in Iraq, including the importance of strengthening and supporting ecclesiastical and pastoral work, and developing a systematic plan to support local churches by supporting various pastoral activities in them. The meeting also covered the crisis Christians face in the Nineveh Plain, as the lack of job opportunities leads to the emigration of many young people to other regions or countries.

Representatives of Catholic organizations also discussed the “Virgin Mary” IDP complex hosting displaced Christians in Baghdad, as the Baghdad Investment Directorate issued an order to evacuate before the end of this year, according to what the Iraqi government authorities announced. The meeting also discussed ways to support the Church in finding housing for the 120 families or about 400 displaced Christians living in the complex.

The representative of the papal nuncio, Father Charles Sona, participated in the meeting, in addition to representatives of Caritas Iraq, the Catholic Relief Services, the Jesuit Worldwide Learning, andfondazione giovanni paolo, in addition to several other organizations that provide various services in the country.

In a related context, Davide Bernocchi, the CRS country direcetor, said in an interview with “ACI MENA” that “Christians have an important role in social cohesion in Iraq,” adding: “The presence of Christians can’t be saved if they are isolated. They must be supported to be able to testify to their faith, through the projects that respond to all components of the community, strengthening the national cohesion in the country.”

Davide also praised the role played by the Catholic Church in Erbil during the ISIS invasion of Mosul, as it provided aid to all displaced people, regardless of their religious or ethnic affiliation. The Church gave an important testimony regarding the role of Christians in this country, following the example of the message of Jesus Christ.

For his part, Devar Sher, Executive Director of Ankawa Humanitarian Committee, said, “It is a joy that Catholic organizations meet regularly to discuss the challenges facing the community ” praising the important role that religious institutions can play in order to strengthen the Christian presence in Iraq. Devar hoped that these meetings would be held on a regular basis to coordinate projects and activities and better serve the vulnerable communities. October is Breast Cancer Awareness Month, an annual and international campaign to raise awareness about the impact of breast cancer all around the globe. We stand with the courageous women and men who have been diagnosed with breast cancer and honor those who have lost their battle with this terrible disease. Don’t forget to check up on your health, because you matter. Concurrently, we were honored with Mr. Ramy Noori Syawish (Ankawa District Mayor)’s visit to the AHC office, who was delighted to support the cause and spread awareness about this important issue. On May 5th, Dr. Devar Sher, AHC Executive Director, visited Chaldean Community Foundation(CCF) headquarters in Michigan, USA, and met with different CCF staff including Dr. Adhid Miri, the Director of Special Projects. This visit comes to discuss and explore joint projects and activities to serve communities in need and to expand the AHC network with the diaspora communities, donors, and partners. Introduction of AHC to Church Representatives On March 6, 2022, Ankawa Humanitarian Committee held a small cake cutting ceremony to celebrate it’s second year as an NGO.H.E. Archbishop Warda, founder and head of the AHC Board, attended the ceremony and talked briefly about the future plans, projects and geographic expansion of AHC. Through the training, the trainees were introduced to methods of enlisting the nine commitments of CHS and outlined the opportunities and challenges humanitarian workers face in implementing CHS approaches. The training participants also discussed ways to implement and Identify mechanisms to promote CHS, improve the quality and accountability in the respective organizations, and design and implement a CHS compliance plan.

As the training drew to a close, Dr. Prabin Manandhar, the trainer, and the Lutheran World Federation Country Representative in Iraq, presented the CHS Board to Devar Sher, AHC Executive Director, and thanked him for providing the training venue.

AHC is currently in the process of becoming a full ACT Alliance member. On Sunday, 26th of September 2021. The Ankawa Humanitarian Committee and for the first time, hosted a USAID Delegation in its main office to talk about the progress achieved. The USAID Office Director Cheryl Voisard and Deputy Director for Stabilization Jodi Rosenstein shared their opinions and thoughts. Currently, USAID Iraq is supporting and funding AHC to build its capacities in different fields through the SACR project. This is done under the supervision and guidance of our close partner Catholic Relief Services. 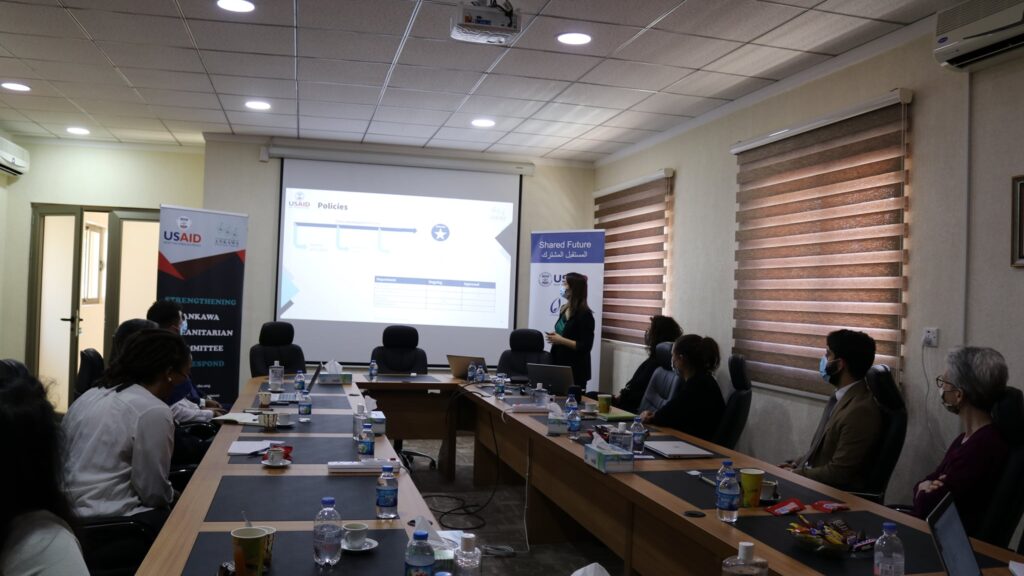